Whitewater rafting is a very meaningful outdoor activity, it has grown in recent years and for good reason. It is a common sport for adreniline seeking atheletes. Every time you participate in a sport such as kayaking or any high intensity paddling sport you can easily get in over your head with a sport such as kayaking that moves pretty fast and requires good reflexes. I may be the case that you have passed the course, or accumulated a lot of experience but, there is still a risk of injury. Although there is only a small probability of being injured, a river can be uncontrollable at times, and we must understand and learn how to protect ourselves. What is the best way to protect yourself? Hopefully, this article answer that in extensive detail. 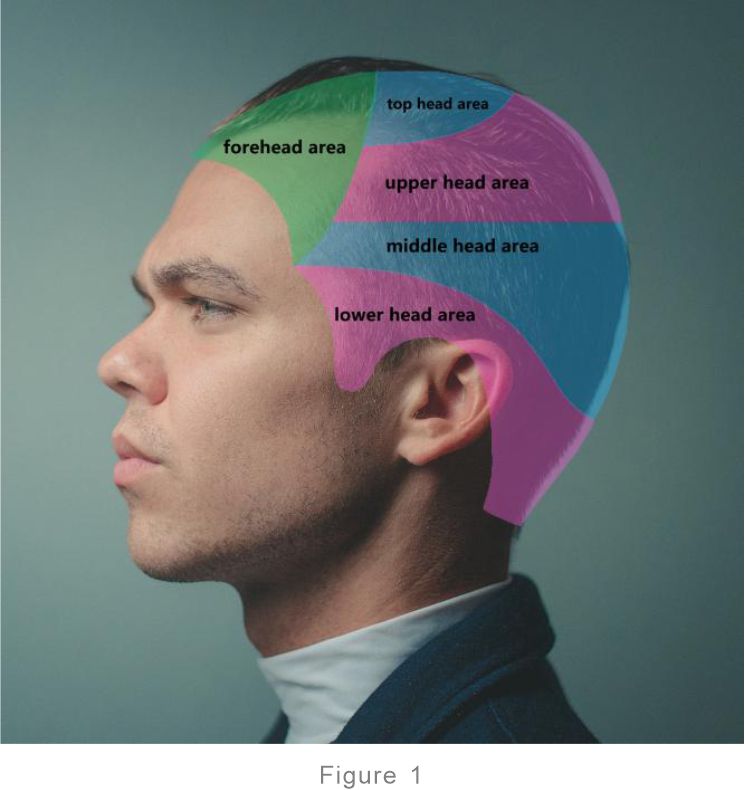 1.What part is most vulnerable to injury when rafting?

The National Electronic Injury Monitoring System (NEIMS) which collected outdoor sports injury reports of 4 million people from 2000 to 2011 from different sources. It includes 7 outdoor sports, including skiing, skateboarding, water sports, mountain biking, cross-country motorcycle, snowmobile and rock climbing. Among the 4 million injury reports, head and neck injuries (HNI) is 11.3%. Of all HNIs, 83% were head injuries and 17% were neck injuries. The head is composed of five parts(see Figure 1), each of which is very important. In definitive terms, among the people injured in extreme sports, it is common for 1 in 10 people suffer head injuries from these seven sports which may include all paddlesports and more intensive water sports.
Head injury is divided into skull fracture and concussion: 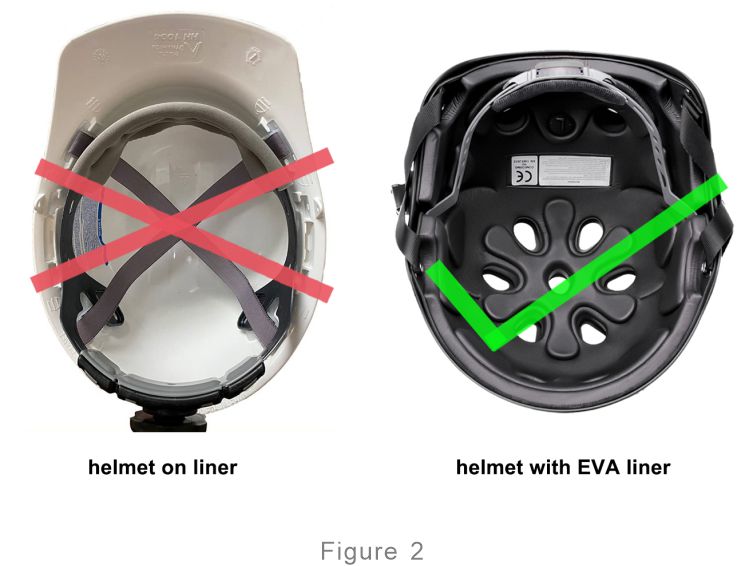 2.What is the cause of head injury from the point of view of mechanics

In this section we must analyze which mechanical events will lead to skull fracture and concussion from the perspective of biomechanics. The possible mehanism of injury can be caused by being hit on the head by a partner's oar, being hit by a branch, or being hit by a rock or boulder when overturning the boat. With a mechanism of injury being possible in many situations a helmet should be worn at all times. If you do not wear a helmet, or the helmet does not meet the defense level designations which would be CE1385 (whitewater paddle standard), this is a safety designation that can refer to a helmet liner or a the whole helmet.

The mechanism of injury is basically a term to describe how the injury was caused. For example, if your head was impacted by any kind of boulder that would be the mechanism of injury. The conditions of the water and visibility could also be considered secondary causes, such as Class V raging river, and how cold the water would be; The environmental conditions altogether could create more danger and a possibility of injury.

The following are the key mechanical factors for head injuries:
2.1 Direct head impact and indirect head impact
Direct head impact: A direct impact to the head caused by an external force directly impacts the head. Because direct impact can generate vast acceleration, according to the law of conservation of energy and the law of inertia, the head needs to generate a deceleration response fast enough to maintain the physical equilibruim. This can result in the injuries that were mentioned such as a concussion and a fracture. It can also create brain swelling (intracranial pressure) or a brain bleed (brain aneurysm).
Indirect head impact: When rafting, the external impact first hits the body, causing severe shaking of the head. In terms of energy and force being transferred from an object to a vehicle (in this case a kayak) some energy can still be transferred to your body even though a kayak may still protect you. For example, If your kayak hits a boulder and is hidden enough for you to not see it, it could cause a whiplash injury or energy that could put signifcant load up through the spine and could cause the brain to absorb the force and cause vibration and energy to affect the brain.

Rowers always want to do whatever they can to keep a momentum and more excitement when rowing canoes and rapids. In many cases, resistance can be a factor if a rower is fighting against the current. In any case it is important to know the dynamics of the body of water you are rowing through in it’s various states and know that collisions will occur, wearing a helmet can prevent or reduce head and brain injuries.
The American Academy of Neurology has stated that, “helmets can reduce the risk of skull fracture by 60% to 70%, and reduce concussion by 70% to 80%”. The role of helmet is to act as a second layer of protection which will dissipate and absorb impact energy and avoid injury due to impact.

Helmets protect the head in 3 ways:

3.1.The helmet shell is a mechanical barrier between the head and the impact object. A good high-performing helmet wil have a hard ABS (Acrylonitrile butadiene styrene) shell, which can withstand great impact without breaking. If it hits a sharp object, it will not bleed. A Hard ABS helmet can prevent head bleeding and skull fracture because it is basically made of case hardened styrofoam and plastic material that is able to handle hard impacts (see Figure 3). 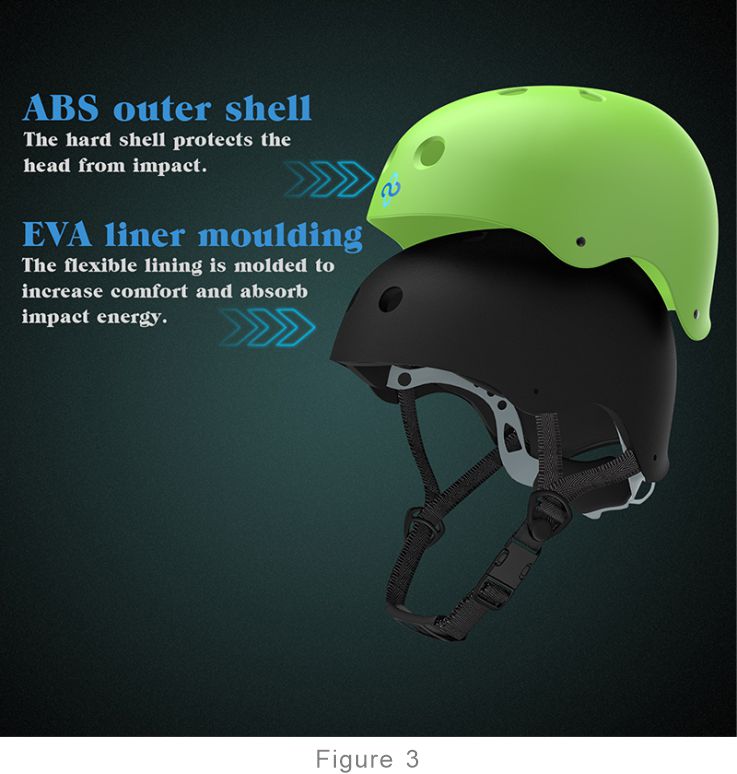 3.2 The rafting helmet with large shell can reduce the impact pressure. A rafting helmet uses a large area ABS shell design to disperse the impact force on a larger surface area. According to the pressure formula, the larger the surface area, the smaller the pressure (see Figure 4). With ABS padding the impact force won’t be concentrated in the specific area of the skull, thus, preventing fractures and any real injury. 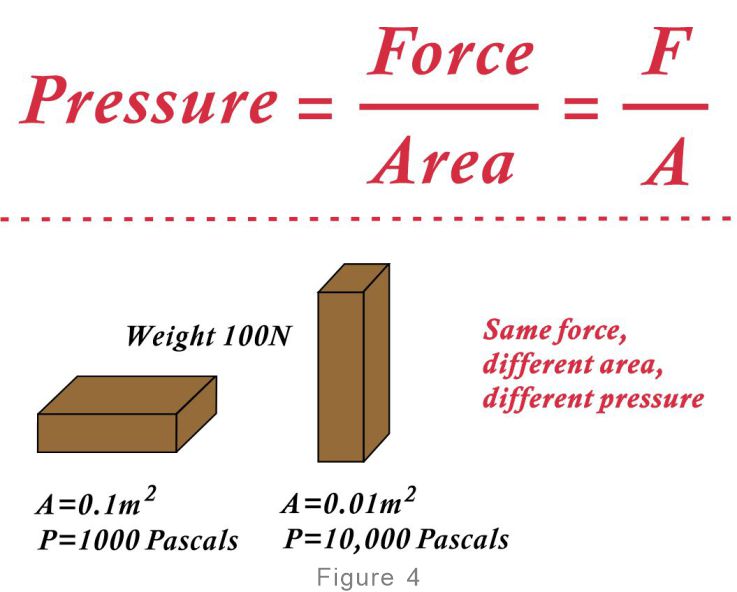 The inner lining of the helmet is made of EPS, EVA, EPP and other materials, which can absorb the impact on the head during collision. According to the Head Impact Telemetry (HIT) system (see Beckwith et al., 2012; Rowson et al., 2009), the injury risk curve can be analyzed. The injury risk curve describes the injury probability for a given mechanical input, that is, the concussion risk for a given rotational acceleration. This relationship is not linear, but sigmoid (s-shaped), usually in the form of Weibull distribution or some other cumulative distribution functions.see Figure 5. 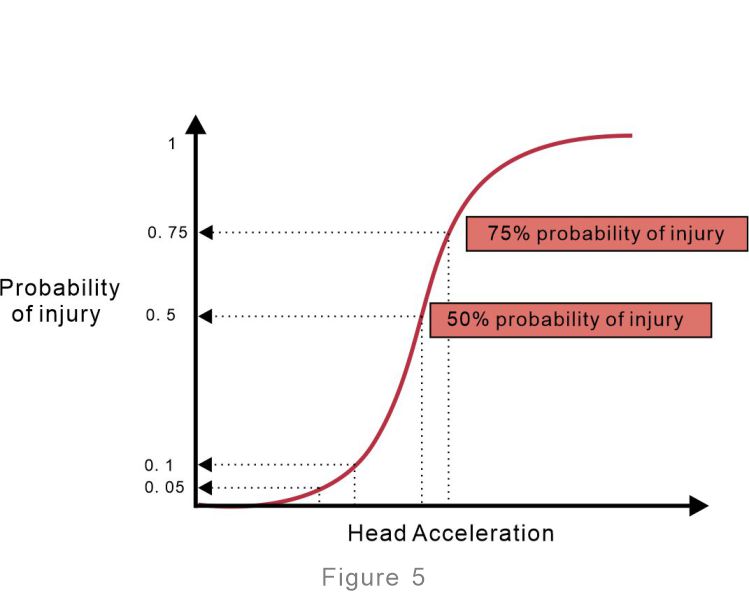 According to the sigmoid graph, if the acceleration is reduced by 25% in the steep part of the curve, the risk of concussion will be reduced by more than 25%.
Increasing the thickness of the helmet lining can increase the cushioning time during impact, thereby reducing the acceleration and reducing the probability of head injury. However, there must be a good balance and compromise between the thickness of the helmet lining and the sports experience. Too large helmets increase the weight of helmets, affecting the appearance and comfort experience.
According to the analysis of laboratory test data, the impact energy diagram of the brain is as follows(see Figure 6). The helmet liner absorbs collision energy and prolongs the stop time of the head by about six thousandths of a second (6 milliseconds), which can reduce the peak impact on the brain. For example, the EVA lining of the helmet is 10mm thick, and the smooth curve extends for more than 6 milliseconds, which can improve the security. 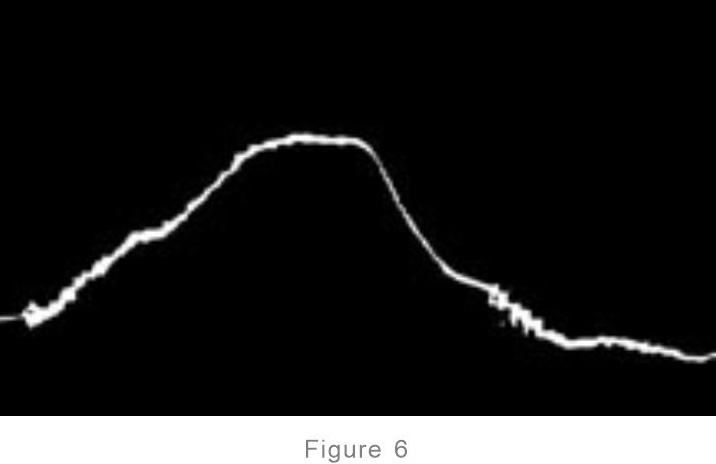 The water helmet is lined with EVA material, which is waterproof and quick drying. See Figure 3.The lining made of EVA material can be used for rafting, canoeing and other sports, and the effect of energy absorption will not be affected after wet water.If you want to know more about paddling helmets, you can read this article:How to Choose Kayak Helmet? 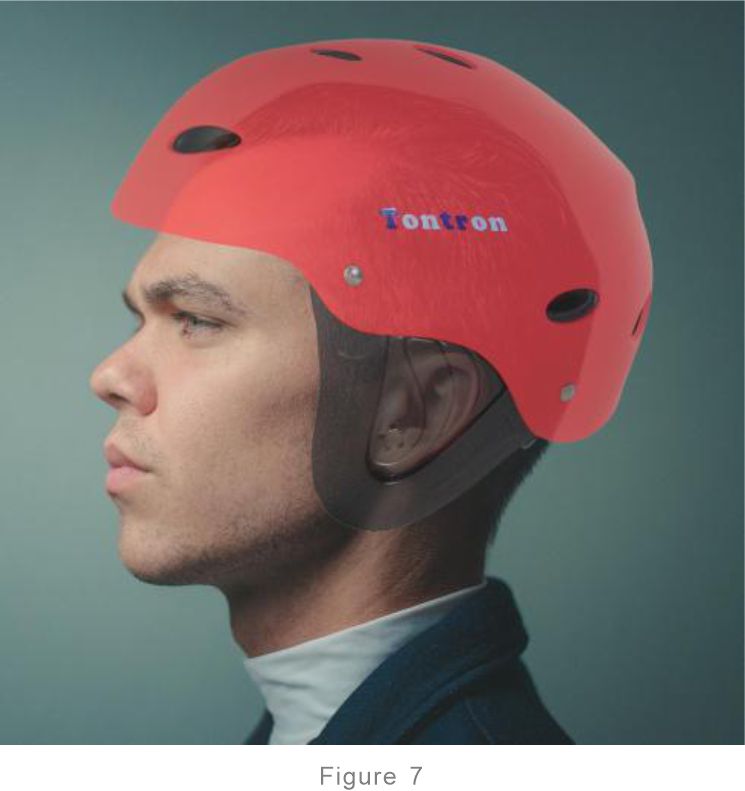 Paddling in Current – Are Helmets Necessary?

Kayaking vs. Canoeing: The 8 Most Common Questions To Ask

No results See all results
✕

Your cart is currently empty.